arjanwrites.com: The Diaries of Courtney Love

The Diaries of Courtney Love 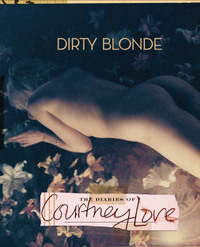 Courtney Love would make a fantastic blogger. FSG recently released "Dirty Blonde: The Diaries Of Courtney Love" that is a collection of notes, lyrics, photos and other personal scraps that Love collected throughout her life. This glossy coffee table book reads like a personal blog with its  opinions about live, brief comments scribbled on photos and her to-do lists for the future. Click here to see some pages from the book.

After previously reading the controversial and bizarre "Love & Death," I was not really sure what to make of Love. Is she just an overly-dramatic narcissist or a brilliant rock goddess with a troubled past (or perhaps both depending on what day it is)? This new book leaves plenty of room for interpretation but it also shows that Loves remains a compelling figure in rock regardless of what people say about her.

VH1 aired a Rock Docs documentary this weekend that followed the singer this past spring (when she was only three months out of rehab) preparing the release of this book and recording her upcoming new album "How Dirty Girls Get Clean." Love gave a British reporter unprecedented access to her life, from the late night sessions in the studio to candid interviews in her bedroom. Click here to see a clip from the documentary in which Love talks about her book and show photos of her with Donatella Versace and Elton John.

Her new album is produced by pal Linda Perry who earlier told Arjanwrites.com that she and Courtney Love are "like peanut butter and jelly." The teaming of those two dames of rock could possibly produce some incredible material that bring Love the hit record she is desperately aiming for.

Courtney Love is at her best when she keeps it real without the fumes of a drug-induced haze. This is exactly why "Dirty Blond" is such a compelling read. The books shows the vulnerable and authentic side of Courtney Love that people love, admire, fear and root for.