A Personal Memory about James Brown 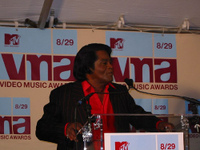 I found this photo of James Brown in one of my Flickr photo albums. I took this photo of him in the press room backstage during the 2002 MTV Video Music Awards in New York City. After his surprise performance during the live telecast, he gladly took some questions from reporters.

A British reporter went ahead and asked him a couple of questions and concluded by telling him that she was a huge fan. He ended up giving her a hug and taking a photo with her behind the podium. A hilarious and memorable moment that broke unwritten press room etiquette but showed that despite his starpower Brown had a whole lotta heart for fans. He will be remembered for many things, but this is something I will not forget.