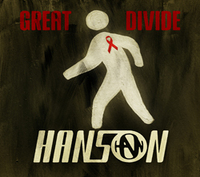 Remember that Mmbopping boy band Hanson consisting of brothers Isaac, Taylor and Zack? Yes, that Hanson! The group decided to change their hair styles and drop Geffen Records to go all the way indie a few year ago. After being absent from the music scene for a little way, the Hanson brothers return with a special song that they wrote to commemorate World Aids Day this Friday.

Inspired by their recent time in South Africa and the tragedy and devastation AIDS has caused there, the group recorded "Great Divide,"  the first track from their forthcoming album The Walk as an iTunes Exclusive song.  All proceeds from the download will go to the Perinatal HIV Research Unit in Soweto, South Africa that is a hospital that helps reduce the transmission of pre-natal HIV/AIDS.

In a press statement, Taylor Hanson explains why the group's recent trip to South Africa inspired them to write this song. "Our trip to Africa was a personal awakening," says Hanson.  "Our experience there made clear that the fight against AIDS is an urgent cause that requires action whether you're in the ghetto's of Soweto or suburbs of America.  That is the message we want to help deliver through whatever means we can amass and encourage others to do so as well."