Dan Keyes went from waiting tables in Manhattan's East Village and living it up with the uber-hipsters at MisShapes to opening for Lady Sovereign during her current U.S. club tour. It all started for the tall and handsome Texan after a brunch date with Jay-Z in 2005. The Def Jam honcho signed Keyes to his label and gave the singer time to form his band Young Love and record his album in New York City and Bath, England. Young Love's debut "Too Young To Fight It" will hit stores late January.

A bunch of Young Love's songs and remixes, including the delicious "Discotech" [Lindbergh Mix MP3], are floating around the internet. He also recorded a video for the synth-rocking "Find A New Way" that you can watch here. If you are into Young Love's sound, make sure to sample his new "Discotech" EP that is available for download on iTunes. (Young Love is listed in the Readers' Choice Poll as "Most Promising Act for 2007.")

Remember that Mmbopping boy band Hanson consisting of brothers Isaac, Taylor and Zack? Yes, that Hanson! The group decided to change their hair styles and drop Geffen Records to go all the way indie a few year ago. After being absent from the music scene for a little way, the Hanson brothers return with a special song that they wrote to commemorate World Aids Day this Friday.

Inspired by their recent time in South Africa and the tragedy and devastation AIDS has caused there, the group recorded "Great Divide,"  the first track from their forthcoming album The Walk as an iTunes Exclusive song.  All proceeds from the download will go to the Perinatal HIV Research Unit in Soweto, South Africa that is a hospital that helps reduce the transmission of pre-natal HIV/AIDS.

In a press statement, Taylor Hanson explains why the group's recent trip to South Africa inspired them to write this song. "Our trip to Africa was a personal awakening," says Hanson.  "Our experience there made clear that the fight against AIDS is an urgent cause that requires action whether you're in the ghetto's of Soweto or suburbs of America.  That is the message we want to help deliver through whatever means we can amass and encourage others to do so as well."

That tear is well timed, Gwen. "The Sweet Escape" is not good, but it is not bad either. The title track is sorta fun. It is Gwen's sophomore slump. I'm listening to this album and I can't stop thinking how she will ever be able to get back on stage with No Doubt. The hot ska chick has gone pimp chic. For her next solo album, I 'd like to hear Gwen do dirty things with smelly British indie boys like The Infadels, Franz Ferdinand and The Go Team. All she needs to do is regain her originality and she'll be back in business. An odd and unexpected pairing might do the trick. 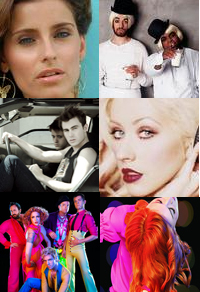 Who were the movers and shakers in music this year? Who were the losers and who were the winners? Now that the end of the year is nearing, it is time for Arjanwrites.com Readers to make up their minds.

Take a few minutes to fill out the 2006 Arjanwrites.com Readers' Choice Poll. The brief survey covers music-related topics including your favorite song of 2006 and your pick for most memorable gay music moment of the year. Click here to vote.

Don't forget to leave your contact email if you'd like to have a chance to win an Arjanwrites.com t-shirt and exclusive music package with a bunch of CDs. I will randomy pick a winner from the entries received. Voting will close on December 28. Results will be published on December 31.

New Young Pony Club is finally making their formal debut in the United States on Modular Records early in 2007. On January 23, the label will be putting out an EP with original songs and remixes of the group's punky-funky first single "Ice Cream." However, a digital version of the EP is already available on iTunes for your immediate listening pleasure.

You might recognize the song from the Intel "Multiply" commercial that is currently airing in the United States and Europe.

New York Pony Club are the brainchild of founding members Andy and Tahita, who put out “Ice Cream” on U.K. indie label Tirk. When all 1000 copies sold out within 3 days, the duo decided to think bigger and form a proper band. London based, by way of Cambridge, the female-dominated rabble rousing band now consists of Tahita (vocals) Andy (guitar) Lou (keyboards), Sarah (drums) and the Ukrainian Igor (bass).

The video for "Ice Cream" has been out for a while but if you haven seen this candy-flavored delight make sure to watch it and get your sugar fix for the day.