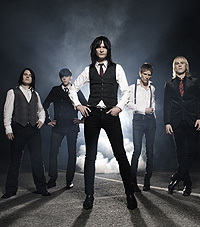 While researching The Attic, I ran into some news about Melody Club, an old favorite of mine. The Swedish pop rockers are releasing their new record "Scream" in Europe next week. First single off this third album is the anthemic synth-pop gem "Destiny's Calling." Whereas Melody Club appeared to be a frothy, Swedish version of The Killers on their previous records, the glammed up sound of the first single is more reminiscent of The Ark. Inspired by the Bee Gees, Fleetwood Mac and Cheap Trick, the album "ranges from super rock disco and piano ballads to power pop," according to a press statement.

"Scream" was mixed in Berlin by Michael Ilbert who previously worked working with the Strokes, Supergrass and the Hives. A large part of the album was produced by the Swedish pop producer Klas Åhlund who is also the man behind pop singer's Robyn's latest hit album.

There are preliminary plans from EMI International to take Melody Club to the States. The band opened for Kylie Minogue during her last world tour and garnered great response outside of Sweden. "Destiny's Calling" sounds quite good and I'm curious to hear the entire new album. (Click here to pre-order the album from Amazon.co.uk.)