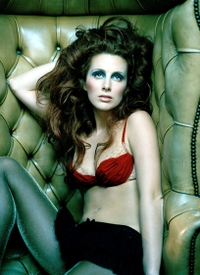 Siobhan Donaghy is not afraid of taking risks. The ex-Sugababes singer returns with her second solo abum "Ghost" that is nothing like the bubbly R&B flavored pop she used to crank out with the Sugababes. The singers appears to have transformed into a more eclectic creature who is looking to push new sonic boundaries as an established pop artist.

"Some people say you can’t make left-field pop music and be commercial,” announces Siobhan Donaghy in a press statement, “and that’s bullshit. They always say that when there’s nothing else out there like it. I remember what was on the radio when my career began and God, it’s so diverse now in comparison. And it feels good to be a part of it.”

She was dropped from London Records after her first solo album was released in 2003 due to a take-over by Warner. Donaghy took a lengthy break to read, travel and explore new music. She hooked up with producer James Sanger (U2, Brian Eno, Keane) to create an album that has resulted in a sound that is "coolly dramatic as vintage Kate Bush, as vocally ephemeral as the Cocteau Twins’ Elizabeth Fraser, as electro-dazzling as ‘Ray of Light’-era Madonna."

"Ghost" is an epic electro tune that creates a compelling soundscape, which might alienate some of her teenage fans, but will likely open the door to listeners who are in the mood for something a little more crunchy. "Don’t Give It Up’, the first single from "Ghosts" will be released 8th Jan 2007. "Ghosts’" will be released in March 2007 (Kisses for EMI in London for allowing me to post the MP3 file.)