« Video Premiere: The Feeling "I Love It When You Call" | Main | Gwen Stefani Live at the AMA's. » 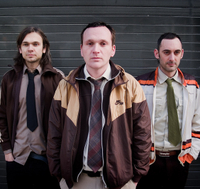 "Ankle Injuries" is the first single from their third album "Transparent Things" that will be released Janury 23 on Deaf Dumb & Blind Recordings. However, you can already downtown the full album at Beatport.com

Inspired by modern Japanese minimalism and throw-away gadgetery, these British lads bring forward an infectious retro-sounding electronica. "Ankle Injuries" is a breath of fresh air with its dreamy guitar-driven intro, fluffy vocals and and the swirling synths at the end of the song. If French electro duo Air would be pick up guitars it would sound something like this.