arjanwrites.com: Doing It For the Kids

Doing It For the Kids 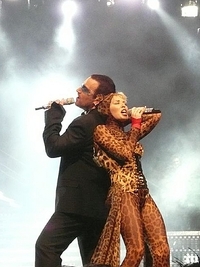 Arjanwrites.com reader Raphael was the luckiest guy in the world Sunday evening. He went to see Kylie's homecoming concert in Sydney and got so close to the stage that he could almost touch Ms. Magic. Check out some of his photos of the concert on Flickr. (He will be more uploading more photos soon.)

He writes me, "After singing 'Red Blooded Woman,' in a leopard print hooded cat-suit, with it's own ears' no less - Kylie tells the audience to stand up, since 'we are in the presence of greatness' ... and introduces Bono to a squealing, delighted 10,000 strong audience (most of whom reached for their phones to tell friends who saw the show last night what they missed out on!). U2 are in town for their concert (both her show and theirs opened last night in Sydney). They sang 'Kids' and at the end Bono pulled out a Swarovski-studded cat collar to tease Kylie with." So hot!

Kylie also gave a gracious nod to Madonna by mashing up "Vogue" with "Burning Up" from her "Fever" album.

He also reports that Kylie previewed her new Scissor Sisters penned tune "White Diamonds" that he describes as "filthy, dirty, happy pop." Just how we like it. A big, big thank you to Raphael for sending his report!