arjanwrites.com: The Killers Raw and Real

« Under The Influence Of Giants Contest | Main | Taking a Day Off... »

The Killers Raw and Real 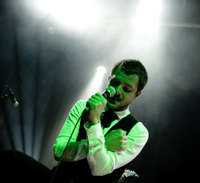 Head over to Clear Channel's Stripped Live to watch footage of The Killers' secret gig at Celebrity in Las Vegas on August 23. Until now, I've only seen shaky phone camera clips at YouTube, but this is television-like quality with stereo sound. Also watch a brief interview that was taped after the band's soundcheck in which Brandon and Dave (he talks!) speak about "Sam's Town" and the haters in Las Vegas. "Good things can come out of the dirt," Brandon laughs. In case you have been living under a rock, know that "Sam's Town" is out in the U.S. today. I have something to say about it later this week.

Watch The Killers Perform at Celebrity