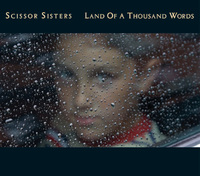 I already wrote about it last week, but now it is official. Scissor Sisters' epic ballad "Land Of A Thousand Words" will be the next single for the group in Europe. The video should be available soon and is rumored to be spectacular. Will keep you posted. In related news, highlights from the band's Halloween performance tonight at the Brixton Academy in the U.K. will air at 10 p.m. British time on Global-Cool.com. This charitable foundation, which launches globally in November, aims to defeat the problem of global warming. The Scissor Sisters webcast will be the first of many Global Cool events aimed at empowering individuals to make a difference. Catch the concert at 10 p.m. tonight here. The recorded live footage will be available for a short time after. So catch it while you can.

It is shaping up to be a hectic week. I'm back in Europe for a week. I will be watching the MTV European Video Music Awards in Copenhagen this Thursday. On Saturday, I will be in Berlin seeing The Killers perform at the legendary Huxley's Neue Welt. Right now, I'm in Amsterdam preparing some posts for all of you. Updates might come at odd times, but I'm planning to blog daily. 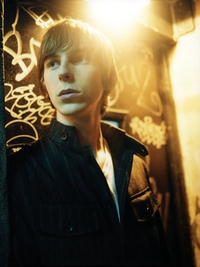 Have you ever wondered what it would be like if Franz Ferdinand would duet with Justin Timberlake? The result of such an unusual pairing might be something that sounds like Young Love. Fronted by singer/songwriter Dan Keyes, the band is testing the waters with their debut single "Discotech." Listen to the song here, or download (totally guilt-free) the Lindbergh Palace MP3 mix (via MySpace).

I listened to an advance of Young Love's debut album "Too Young To Fight It" that will be released on Island/Def Jam early 2007. With its slick synth-rock production, clever hooks and Keyes' soulful crooning, it will surely please both the indie hipsters over at MisShapes and the screaming kids at MTV's Total Request Live.

A Texan-turned-New Yorker, Keyes previously was a member of the Austin rock outfit Recover. He decided to head out East to work on his own music career. After recording several demos and writing plenty of material, he was scooped up by Island/Def Jam. He is now guided by some of the same people that made The Killers a breakout hit, so it might be just a matter of time before Young Love will hit the big time.

Make sure to pick a copy of the current issue of Australian gay magazine DNA at a newsstand near you. I am featured in the magazine commenting about gays and their love for pop music. Click here to read what I had to say about Kylie, Madonna, and some of pop records that mattered most to me.

The one and only QBoy is back with a video for his brand-new single "Q.B.O.Y. (Is Just So Fly)." It  was filmed by directors Jarrah Gurrie & Nicolas Wagner in New York City when the rapper recently visited the city during his U.S. tour. The openly-gay British hip hop artist, who coined the clever term "homo hop," was in the States to support his documentary "Pic Up The Mic."

Jarrah wrote me that he enjoyed working with QBoy during his time in New York. "He was a proper English gentleman but not afraid to speak his mind, which is why we love him," Jarrad adds. "With this video, my co-director Nicolas Wagner and I wanted to make a 'classic' video with nods to some hip-hop videos and pop videos that we love." It  seems they also took some cues from their critically-acclaimed, gay-themed short film "Cabalerno, which is worth watching.

On "Q.B.O.Y.," the sharply-tongued QBoy spits out lyrics about feeling confident as a gay rapper knowing that he's the odd boy out not "fitting the stereotype." Throw in some handsome models and a little bit of that old-school, black and white street flair (including a boombox) and what you get is a bonafide (gay) video hit.