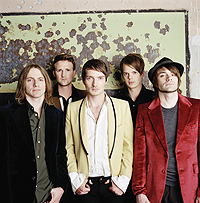 The Feeling has gotten a hold on me. This London and Sussex quintet brings a refreshing '70s inspired tone to the U.K. pop-rock scene with their upbeat music that is a welcome change from the mopey manners of many popular British bands such as Keane and Coldplay. Imagine 10CC jamming with Scissor Sisters inspired by Supertramp plus a cameo by Bryan May. Could it get any more fun?

According to reports, The Feeling's lead vocalist Dan Gillespie Sells is openly gay. The singer allegedly commented on his homosexuality in a recent issue of Attitude. Bob emailed me that Gillespie also said that his sexuality has inspired some of the songs he wrote for the group's current album "Twelve Stops And Home." The song "Strange" is directly related to him feeling different as a gay man. "If you feel it, and if you mean it, don't apologize. And you'll be just fine," he sings. (Update: More about this here.)

Musically, The Feeling doesn't mind to be a new guilty pleasure for the masses. "We like getting away with murder," says Gillespie in their press biography."We like great big choruses with great big hooks." The truth of the matter is that The Feeling knows how to make those hooks memorable. No wonder they name Queen, Karen Carpenter and Mick Fleetwood as people that have influenced them.

In June, their debut was released in the U.K. in conjunction with several television appearances. The group is now gearing up for more exposure stateside. They are currently on a short tour in the U.S. together with The Fray to promote the release of their EP "Four Stops And Home" that is available on iTunes. also, catch their in-store performances at Borders in New York and Washington. According to my source at Interscope Records, their full-length album will be formally released in the U.S. early 2007.

I believe that The Feeling has huge mainstream potential in the U.S. It is a clever move by Dan Gillespie to come out of the closet now and avoid all the gay innuendo, so we can all focus on what's really important: the music.

Listen to The Feeling "Strange" [wma]