« The Ark Back in the States | Main | Video Premiere: The Killers "Bones" » 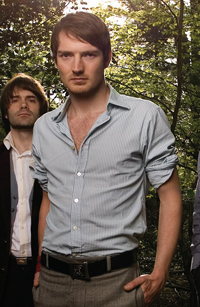 I think we might have found ourselves a brand-new gay icon in the making. Yesterday, I alerted you about hot new British pop band The Feeling. In a pile of magazines here on my desk, I found the July issue of Attitude that features the group's enigmatic frontman Dan Gillespie Sells. In an interview with Martin Aston, the singer talks openly about his homosexuality and feeling "the odd one out."

Given his charismatic stage persona, sense of style and fashion and heartfelt songwriting with tremendous mainstream potential, Gillespie Sells is a new gay heartthrob to lust after.

Some quotes from the interview:

About feeling different: "My mum's gay, my uncle too, so I grew up thinking it was perfectly normal, but I certainly felt strange in the gay community, like the odd one out. (...) I wrote 'Strange" at that point in your life when you realise you feel the odd one out."

About having a lesbian mother: "The first time I discovered not everyone had two mums and a dad was when I went to school."

About London's gay nightlife: "Nobody in Soho ever really feels beautiful or desirable, do they? Because everyone's going around like peacocks (. . .) Everyone is oozing sexuality, but they're quite clearly dying for a hug."

Read the entire interview Dan Gillespie had with Martin Aston here (courtesy of Attitude). The Feeling's EP "Four Stops And Home" was released on October 10 and is available on iTunes. Watch their new video "Sewn" here.

Listen to The Feeling "Strange"