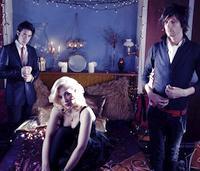 After Mercury Records foolishly dropped '80s inspired pop outfit The Modern, the band regrouped and decided to release their future records under a brand-new name. The Modern is now called Matinee Club and is currently working on brand-new music. "Do not think of this as the end of The Modern but rather the metamorphosis of the band into something much more defined," writes the group on their web site. "As you will know, drummer Bob and guitarist Robert have moved on (Robert will continued to write and record with us) and we will now perform together as a three piece."

Nathan, Emma and Chi will first be releasing their new single "Discotheque Francais" in the U.K. on Planet Clique Recordings. The song will be available as a special limited white vinyl and CD on November 13.  Remixes will come from Hoxton Whores and Manhattan Clique. U.S. audiences will get to enjoy a new Matinee Club EP with some of their older tunes on Ninthwave Records  in January 2007.

Sources close to band have released a new Manhattan Clique remix of "Discotheque Francais" to Arjanwrites.com for your sampling pleasure. (If you are on MySpace, make sure to add Matinee Club as your friend. They really deserve your love.)