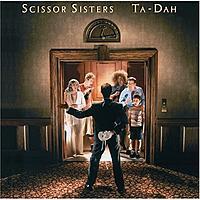 Scissor Sisters are not all about glittery costumes, campy tunes and Jake Shear's distinct falsetto vocals. In fact, the New York five piece has always used their fun disco ball antics to shine a light on a bigger picture. While culture wars are raging and popular music much too often embraces mediocrity, the Scissor Sisters boldly continue to spread a message of tolerance and individuality in their own unique way. It might sound cliche, but it is the group's colorful wrapper that makes it so compelling. You can stream the entire album on the group's MySpace page.

On their new record "Ta-Dah," Jake Shears, Babydaddy, Ana Matronic, Del Marquis and Paddy Boom represent an attitude that is both empowering and liberating. The album is filled with lyrics that spread the Scissor mantra with lines like "Do what you want 'cause it is your own sky," "It doesn't matter how you swing it" and eventually "You are going to be all right."

Two songs in particular seem pivotal on "Ta-Dah." The first one is "The Other Side" that includes a  spoken quote from Judy Garland in the track's outro. "I have a right to be in love/I have a right to be loved/I know there is an over the rainbow for me," the diva says in a vintage recording. Those words will mean something different to different people. For gays, it obviously has something to do with civil rights.

(Read more after the jump.)

"Everybody Wants The Same Thing" is another track that pretty much sums up the band's outlook on life, asking questions like "What is it that you want/What is that you give," and answering them with "Love is what I want/Love is what I want/That's how I'm gonna live." Scissor Sisters are all about seizing the day.

"Ta-Dah" also has a rare political moment. On "She's My Man," the group mocks George W. Bush and the actions after the Katrina hurricane disaster. "May the best queen hold the crown for the most bush sold on the levees," Shears sings. Touché, guys.

Musically, "Ta Dah" is a mish mash of good ole '70s style songwriting ("The Other Side," "Land Of A Thousand Words"), honky tonk ("Intermission," "I Can't Decide") and disco funk ("Light" and "Ooh" with a deliciously dirty bassline).

They even employed Stuart Price to give it some modern-day electro touches on "Kiss You Off," which features Ana Matronic on lead vocals. It is the only tune that prominently features the only female member of the group.

Scissor Sisters' music obviously embraces their "godfather" Elton John. And John loves Shears and the gang right back. He plays piano on the single "I Don't Feel Like Dancing" and "Intermission."

Another idol of the group gets his own homage on "Paul McCartney" with its savvy electro arrangement that would make Warren Fischer proud. Shears cannot put it any clearer when he croons, "I'm just in love with your sound."

Also part of the group's musical team is Carlos Alomar, a guitarist who is mostly known for his work with David Bowie, most notably "Fame."

Not only the music is a good reason to get a copy of "Ta-Dah." Reading the group's thank you's in the CD liner notes is insightful. Bob Geldoff, Kylie Minogue, Bono, Dan Savage, Rufus Wainwright, Heatherette, their favorite photographer Kevin Tachman and San Frantastic Queens are among the long list of people they thank. Full proof that the group is a firm staple of the hip and happening Manhattan social scene.

In conclusion, "Ta-Dah" is an impressive declaration of independence by a group that delivers a powerful message that is both bold and beautiful.