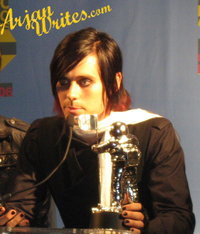 Some people just take themselves way too seriously. Jared Leto showed off his snarky side backstage at the VMAs when he met with the press after his group 30 Seconds To Mars won the MTV2 Award. It all started when Leto was asked about his alleged romance with Lindsay Lohan a while back. "Next question," he snapped. I then asked about his fashion and style as a segue to inquire about gay fans. He either misunderstood me or he must have been simply to lazy to answer the question seriously. "I was four or five when I first put up lipstick and ever since I have been trying to find my innerself and now I'm working on a boob job and I will go to Tijuana to finish the rest off," he said followed by the bitchy "next question." His bitch fest continued and even a reporter from the New York Post wrote about his behaviour in Saturday's Page Six Column. Read it here.