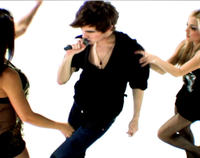 As announced last Friday, the video of Dangerous Muse's "The Rejection" made its formal debut on LOGO this weekend. Now head over to the LOGO web site to watch it in its entirety. I think it turned out very well. It has the right balance of teenage drama and dramatic editing. Also check out some fun behind-the-scenes footage that was shot during the making of this video. It shows Mike Furey getting slapped in the face a few times. What do you think of the video?