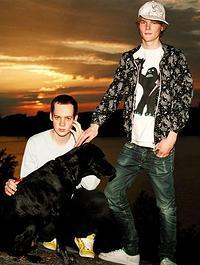 Arjan Writes faves Lo-Fi-Fnk are slowly but surely gaining notoriety outside of Sweden. Over the last few weeks the hip electro-pop duo have played shows across Europe including a couple of high-profile Modular showcases in London together with Cut Copy and New Young Pony Club. Lo-Fi-Fnk's debut "Boylife" will be released in the U.K. on Moshi Moshi Records on July 31. I have been corresponding with August and Leo and recently conducted a brief email interview for this blog. The things the guys wrote me are as fun, quirky and cute as the music they make. Read the entire (unedited) interview below.

Can you sum up the sound of Lo-Fi-Fnk in one sentence?
Luxurious and directional clubheads who have some indie friends. Or luxurious lo-fi pop maybe.

You are covered in the June issue of GENRE. What are your plans for the U.S.?
Release our album "Boylife" and make Americans fall in love with us by doing live gigs. Maybe get married also, if there are some nice proposals. We would love to be married before 24!

Who are some artists that have influenced you? Abba perhaps?
There is nobody specific that we always think of. We want to get influenced by new things all the time and not by other artists. It is is strictly forbidden in our studio to think of where it comes from. It's so old to get influenced. It's 2K6!

Are you gay or straight, or do you prefer not to disclose your sexuality?
I think we are too gay to be straight and too straight to be gay. If you are beautiful you'll definitely get our love.

Is "Steppin' Out" a song about coming out? What's the story behind the song?
If you have done it or should do it, it can absolutely be about coming out. The theme of the song just came with the music. There was something "struggling" and "fighting" about it.

What is your favorite song on "Boylife"?
We feel a lot for "City" and "Steppin' Out." They are very close to our hearts.

Boxers or briefs?
One of us is so totally the boxer type, but the other is a pure briefs user. The briefs user hates 'em loose, he says.

What is the last album you bought or downloaded?
"The Seven Gates of Hell" by Venom.

What's the ideal boylife?
Being on tour and doing promo work. There are always people around that help you with everything and if your money is out they give you some more. And you don't have to clean your room. Plus, it's okay to get drunk every night.

What's the most outrageous gift you ever received from a fan?
I think it was this crazy letter I got a couple weeks ago. Fans had drawn a map and in the letter they had written that they saw me a lot around where I live. They wanted me to follow the map on an exact time and day. And at the end I would find a box or something, but I didn't dare to do it.

What are ingredients of the perfect pop song to you?
A great riff, nice lyrics (either clever or very stupid), a great chorus. And it should have a sexy sound.

Kylie or Madonna?
Oh man! That's a tricky question! We like Kylie more now but Madonna's old stuff is so much better than Kylie's. But Kylie is sexier!