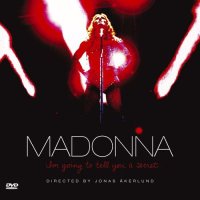 Madonna's special CD/DVD package "I'm Going To Tell You A Secret" was released last Tuesday. Directed by Jonas Akerlund, the double disc set is a must-have for fans with wide-screen performance footage of many of her hits filmed during the Reinvention tour. The set also features the documentary that follows Madonna's journey behind the scenes with her touring family and real family as they travel around the globe. You might remember that priceless line "Who is the queen, Rocco?" from the film.

The disc set also includes bonus footage that did not air during the television premier of Akerlund's documentary. Head over to YouTube to check out a hilarious skit of Stuart Price and drummer Steve Sidelnyk getting pampered during the tour in Los Angeles. Toying around with a thick cucumber and walking around in frilly high heels, the two are showing their love for each other. Also note, Stuart is keeping up with his craft by reading a book called "Recording Techniques."