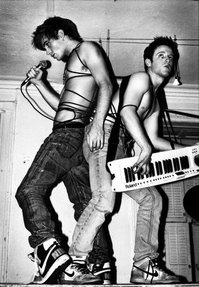 While on the topic of my honeys Dangerous Muse, there are a few related news items about the group.

A spokesperson for the band told me that the video for "The Rejection" is close to being finished at this time. The video will be premier at LOGO's NewNowNext show in one of the upcoming weeks.

Mike and Tom will be spinning tonight in the DJ booth at GENRE's annual Pride party at the Time Hotel (224 West 49th Street) in New York City that will start at 7 p.m.. If you're interested in coming, make sure to RSVP here.

Dangerous Muse's management company has put up a couple of recent songs from the group on their web site, including "Apart" and "All Yours (The Doctor)."