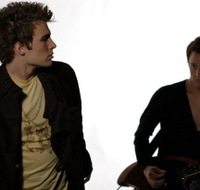 Bang! There they were. Virtually out of nowhere electro pop duo Dangerous Muse landed smack dab on the cover of The Advocate's music issue in April and got music lovers buzzing all over the country. It rarely happens that a brand-new act gets this amount of exposure so soon, but a big fat recording contract, hooky synth melodies, a photogenic look and some gay innuendo sure helped to capture that coveted front page.

Dangerous Muse are sexy vocalist Mike Furey and talented synth wiz Tom Napack. The two first met at Fordham University in Manhattan where they were cast together in a school production of the famous rock opera Tommy. When Tom brought in his vintage synths to show off some cool new sounds, Mike latched on and the two decided to experiment more with sounds and vocals together. One of the first tracks they put down on disc in Tom's dorm room was "The Rejection" that eventually got them signed to a major label.

Furey tells Arjan in a cozy Chelsea lunchroom that much of what has happened to Dangerous Muse to this point has been "chance oriented" without much planning or strategizing. "We were just having fun with the music," the singer explains. "We had no expectations at all. We started making stuff that we'd like to hear and were hoping that others would like it too."

He recalls his first meeting with the legendary Seymour Stein who offered Dangerous Muse their first recording contract. Stein is a household name in the entertainment industry who is responsible for launching Madonna's career in the early '80s. "The meeting with Seymour was totally unplanned. I was going out one night and I had a CD with one of our songs with me to play at a club," says Furey. "I called a lawyer friend of mine who happened to be two blocks away having dinner with Seymour Stein. He invited me over to meet him. I tried to play it cool while Seymour was eating a 30 pound lobster in this fancy restaurant," he laughs. "After he was done with dinner I gave him my iPod and I played 'The Rejection' for him. Halfway through he told me he liked it. Two days later, I received a call from my friend who told me that Seymour had offered us a deal."

Musically, Dangerous Muse combines '80s inspired synth melodies with Furey's enigmatic vocals. The duo plans to put out a full-length record in the fall of this year. Until then, new music will be released on EPs that will give fans a taste of what's to come. The launch of new songs is part of a clever online marketing push that includes the group's popular MySpace site that helped to turn their first EP "The Rejection" in a bona fide hit. The EP was released late 2005 and shot to number two in the iTunes Dance Chart earlier this year. Not a bad start for a debuting act.

Napack explains that the new tracks the group is working on for their debut album are "reminiscent of Depeche Mode, Erasure and Soft Cell." Their upcoming download-only EP (out late August) features the pacing "In This Town," the lighthearted "Break Up" and the dark, high energy title track, the aptly titled "Give Me Danger." "In our songwriting it is important to not only restrict ourselves to synthesizers," says Furey. "We also include some alternative guitar stuff."

With a big deal recording contract and a hit song, the pressure is on for Dangerous Mouse to deliver the goods and please fans and critics alike. "We are very aware of the expectations about our music, but I don't think it influences how we work," says Napack. Furey chimes in, "We are confident about the stuff that is coming up and we're very happy with it. That's what matters most."

The guys are very aware of the visual aspects of their music. Just like in the '80s, their image is an important part of what they put out for people's entertainment. But according to the duo style does not supersede substance. "We are a very visual act. But it is not about being superficial," explains Furey. It is about visuals to establish a presence. It is not just about being two pretty boys. Let's not forget we write our own music. We are not the Spice Girls." Napack laughs, "I hope people like us for our music and not just because we pay a little attention to our hair."

But it is not the guys' hair that has been the hot topic of discussion at blogs and messageboards. In their promotional materials, Dangerous Muse has coined the term "heteroflexible" to describe their sexuality. "We are not gay and we are not straight," Napack attempts to explain. "It is a cross of metrosexual and gay guys that dress well."

They refuse to simply call it bisexual. "That is such a loaded term and has a strong stigma," says Furey. "We are not trying to be vague about it. We just try to represent where we are coming from. It is about being comfortable without labeling yourself as one certain type." Both of them emphasize that their all inclusive stand is not a marketing ploy to attract more fans.

Furey and Napack dream about having their own show on the Las Vegas strip some day to create a unique concert experience for fans. "We are going to need lot of fog machines," says Napack. "It creates this texture in the air that makes whatever you look at a little more surreal. And we need some violent aspects, of course. I'm definitely going to smash my keyboard."