arjanwrites.com: Video Premiere: Panic! At The Disco "But It's Better If You Do"

Video Premiere: Panic! At The Disco "But It's Better If You Do" 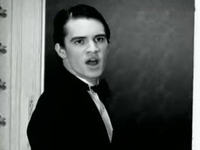 The guys from Panic! At The Disco are rapidly gaining chart momentum with more and more video play of their single "I Write Sins Not Tragedies" on the major music channels. The Las Vegas band is moving forward in Europe and recently put out the video for the second single "But It's Better If You Do" that is also taken from their debut "A Fever You Can't Sweat Out." The video is reminiscent of The Killers' "Mr Brightside" with the setting in a brothel, a love innuendo and the campy, burlesque decor.

I met Panic! a few weeks ago and there are three things you might not know know about handsome singer Brendon Urie. First of all, he was raised as a strict Mormon but left his church to pursue a career in music (much to his parent's dismay). Secondly, Urie counts Queen's Freddie Mercury as one of his biggest inspirations as a singer and stage performer. And third, even though he grew up in Las Vegas he doesn't like the hotel strip. "We mostly stayed in the suburbs. I haven't been to the Strip in years," Urie told me. "None of us are old enough to gamble anyways!" [source]

Watch P!ATD "But It's Better If You Do"