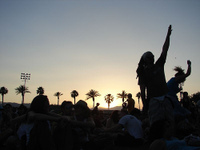 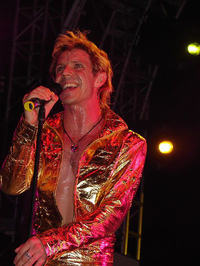 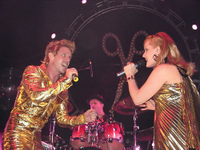 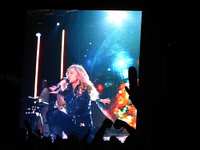 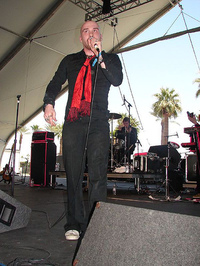 The 2006 Coachella Arts & Music Festival concluded last night with stellar performances by Madonna and Scissor Sisters. Yes, the indie kids rocked it to the profanity of Madonna and the glitter of Scissor Sisters. I had an amazing day on Sunday also enjoying performances by Infadels, Metric, Paul Oakenfolk and stellastarr*. I have exclusive photos of the concerts on my Flickr site.

Madonna's appearance was one of a kind. I've seen her perform several times, but I truly had the feeling that this show was very special to her. The audience was close to eye-level with her and there was no barrier between her stage and the audience. I don't think Madonna has been this close to her fans in a long time. The Queen of Profanity told the audience that she was "fucking excited" to be playing Coachella (her first festival), followed by "Are you gonna give me some of your drugs? Show me some love!" Her set looked amazing and it showed that she is ready to take "Confessions" on tour. Her rocking version (playing electric guitar) of "I Love New York" stood out for me. Other tracks on the 6 song set list included "Ray Of Light," "Hung Up" and "Everybody." Masturbation is also part of her act again. During "Let It Will Be," the singer put her hand down her pants, jiggled it and took her hand back out to lick off her fingers. I'm not kidding!

Scissor Sisters reached another milestone in their career. They closed the festival on Sunday in the fantastic outdoor theatre. The band played some of their old hits ("Take Your Mama," "Mary" and "Filthy, Gorgeous"), but also showcased some songs from their upcoming new album. Their new material is really strong and I can't wait to hear this new record. Jake and Anna were parading around as usual that impressed a lot of people that were not familiar with the group yet.

Mylo had the difficult task of filling the stage after Madonna's concert in the Sahara tent. Recovered from his ear condition, Mylo played a fun set that attracted mostly a crowd of young hipsters.

The U.S. concert debut of Infadels was impressive as well. Wow! These lads from Hackney have some energy to share. In a non-stop session of almost an hour in the scorching heat they delivered pure entertainment. The audience in the Gobi tent returned the favor and gave the group a warm welcome to America.