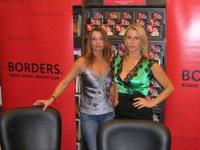 British pop duo Bananarama is on a whirlwind tour of the U.S. to promote their comeback album "Drama" that was released last Tuesday. Sara and Keren are visiting Borders book stores in Miami, New York City, Hollywood, Long Beach and West Hollywood this week to meet fans and sign their album(full schedule). Yesterday. the two popsters were at the Borders at Columbus Circle in New York. Click here to see photos of the meet and greet with fans that attracted a considerable crowd of people. Make sure to check out "Look On The Floor," the last single taken from their record.

Watch Bananarama "Look On The Floor"