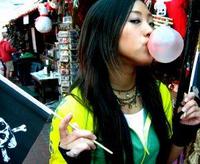 What do you get when you combine the fierce delivery of M.I.A. with the production talent of Diplo and the commercialized street cred of Gwen Stefani's Harajuku Girls? The answer is Tigarah, a female MC from Tokyo who raps in Japanese and English. Produced by studio innovator Mr. D, Tigarah takes her cues from a range of different styles including baile funk, UK grime, Baltimore club and hip-hop.

While attending Tokyo's Keio University majoring in political science, Tigarah decided that musical freestyle would be a much better way to speak her mind. She was inspired by the freeflowing beats and straight up rhymes of baile funk, the popular sound from Rio's slumps (that I have written about before). Tigarah traveled to Brazil to learn more about the music and met up with Mr. D who was touring the country at the time. She is now in Los Angeles getting ready to shoot a video with Patrick Frazier for "Girl Fight!" and working on new music for their debut full-length album.

What I like about Tigarah is her unique musical angle. Her Japanese roots combined with hip hop and baile funk truly creates a sound that is inherently global. There are obvious similarities with M.I.A. but Tigarah's lyrical references to pop culture elements inject a unique style of her own. Check out her MySpace site to stream and download tracks from her forthcoming album. Highly recommended. [source]