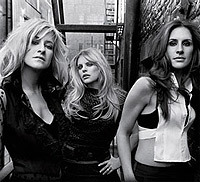 Dixie Chicks are hotter than hot.  After 2003's controversy and radio boycott, the Texas trio is no longer a plain country & western act. They have become a crossover pop culture phenomenon that is about to gain more stream with the release of their new album "Taking The Long Way" on May 23. Instead of taking the easy road, Dixie Chicks continue to make bold and daring choices both musically and lyrically.

Produced by legendary Rick Rubin, the album shows off a rockier side of the group. On the first single "Not Ready to Make Nice," the trio makes a clear statement about how they feel about the events in  2003 when singer Natalie Maines criticized President Bush that ignited a public firestorm and a boycott of their music on country radio.

In the song, Maines sings "I'm not ready to make nice. I'm not ready to back down. I'm still mad as hell and I don't have time to go round and round and round. How in the world can the words that I said send somebody so over the edge." Country radio appears to have forgiven Dixie Chicks. After its first week of airplay, the single made a strong entrance in the Billboard Country Singles chart at #36. Thanks to NoComment for the tip.