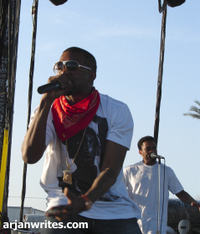 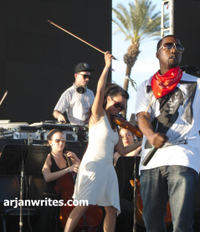 The first day of Coachella was fantastic. I have very little time to write up a full report this morning, but I was able to upload some of the photos that we took in the press pit right in front of the stage of Kanye West, Depeche Mode and Imogen Heap. Click on the photos to pop up a enlarged version. Keep checking my mobblog on Flickr to get period photo updates from the event today.

I'm sitting here in a Starbucks in West Hollywood preparing the interviews that I will be conducting with artists at the Coachella Music Festival this weekend. It is chilly in Los Angeles, but it looks like it will be a scorcher out in the desert. Believe me, I will be lathering on plenty of sunblock.

I'm looking forward to a bunch of different performances including Scissor Sisters, Imogen Heap, Madonna, Mylo, Depeche Mode, Paul Oakenfold, stellastarr*, Infadels, Daft Punk and the White Rose Movement. It will be technically difficult to live blog the event, but I have a couple of alternatives for those of you who want to get a taste of the action on stage and behind the scenes.

You can visit the AT&T Blueroom to watch live footage from the performances. I will also attempt to mobblog Coachella with some unique backstage shots and photos from the press area. Mobblogging will depend on the availability of cell phone service in Indio, which is notoriously flaky. You will able to find my Coachella mobblog on Flickr starting on Saturday afternoon if it all works out.

Butch Walker is arguably one of the most gifted rock and roll melody makers in the industry. He wrote songs for Lindsay Lohan, Sevendust, Simple Plan, American Hi-Fi and most notably Avril Lavigne for whom he penned the chart topper "My Happy Ending" (video). In 2004, he released his artist album "Letters," a collection of infectious radio-friendly fare that failed to meet its chart potential.

The Georgia rocker is not afraid to speak his mind and has been very supporting of gays and their equal rights. "I'm probably the least homophobic heterosexual you'll ever meet," said Walker in an interview I had with him in 2004."I grew up in a redneck town with a lot of close-minded opinions. It really helped me to be this freak in high school with three color hair and crazy clothes, because I got out of there quicker and it made me gravitate towards a culture and people that embrace individuality."

Butch returns this summer with "The Rise and Fall of Butch Walker & The Lets Go Out Tonites" that he recorded with his new band The Lets Go Out Tonites. "Bethamphetamine (Pretty Pretty)" is one of the new songs that will appear on the album. It is a finely cut, glammed up rock and roll track that is perfect for summer. Pay special attention to the instrumental bridge towards the end of the song to hear the singer's band rocking out. Look out for his new disc to hit stores on July 8. (Thanks to Butch' management for allowing me to stream this track.)

This will be a light blogging day. I'm departing to Los Angeles this morning to attend Coachella press events tonight. I will travel to Indio out in the California desert on Saturday morning to attend the annual music festival and to conduct some artist interviews. I will be trying to get as close to Madonna as possible, believe me.

UPDATE: Angelitos! Question: What is the hip and happening place in Los Angeles for dinner and drinks on Thursday and Friday night? 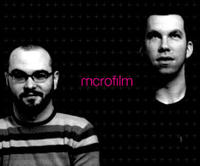 Microfilm are Chicago duo Matt Keppel (vocals) and Matthew Mercer (synths) who create their own distinct fusion of traditional synth pop and modern-day dancefloor music. Their common love of "synthesizers, soundtracks, high design and low art" brought the two musicians together in 2005. From Mercer's home office the two have been experimenting to develop their own sound. The group writes on their MySpace site that they want to bring vintage synthesizer pop into the new millennium. "We don't want to bore with the same track repeated over and over or get rooted into one specific style only," Matt writes me in an email. "I think 'synth pop' can and should be a broad umbrella term." The band is currently unsigned and is looking for a label to get their music marketed and distributed.

Check out the instrumental track "Sex Education" that is a fun electro-pop tune that sounds like it was put through a PowerBook shredder to create a peppy, cut up effect. Matt writes me that this instrumental track is a good example of the group's 21st century synth pop that was made for the dancefloor. Visit the duo's MySpace site for more samples of their music, including a great remix they did for Ladytron that the group might use in the future. Download "Sex Education" by Microfilm [mp3]. (Thanks to the band for sharing this track with Arjan Writes readers.)