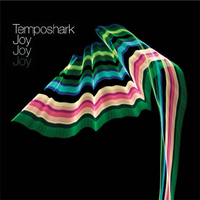 Electro pop group Temposhark is releasing their buzzworthy new single "Joy" in the U.K. on May 15. The song will be collaboratively put out by Propaganda Records and their own Paper and Glue label. I wrote earlier about the band in a Hot New Talent Alert on January 3 after I first heard the Metronomy mix of their track "Not That Big" that features a cameo performance by Imogen Heap.

The London trio of Rob Diament (vocals), Luke Busby (synths) and Laurence Warder (bass) has already independently punched out several singles and the group has been very successful playing the alternative club circuit.  The group was established a few years ago when Diament and Busby met in London. According to their biography, they "wrote loads of songs that would've bedded nicely on New Order's 'Low-Life' and scared the bejeesus out of much of the Pet Shop Boys' 'Nightlife.'" The group recently added DJ/bassist Laurence Warder to the group.

With the support from their peers and energetic live gigs, Temposhark has created plenty of momentum to release "Joy" to a wider audience of pop aficionados. "We wrote Joy in about 30 minutes, it was an instant record, a burst of energy that literally appeared out of nowhere," Diament tells me. "For me it encaspulates that feeling when you first kiss someone, the rush of falling in love.  It's become my favourite song to perform live with most of the audience shouting the chorus out with us."

"Joy" is a throbbing slice of dirty synth pop with a fitting '80s sheen. After the atmospheric "It's Better To Have Loved" and "Invisible Ink," this new single boasts Temposhark's dance floor sensibilities.

Temposhark has offered Arjan Writes an exclusive download of "Joy" for three days only. Download Temposhark "Joy" [mp3] or stream the track in the player below if you want to give it a try first. EnJoy, folks.

UPDATE: Song is no longer available to stream or download. Thanks again to Rob of Temposhark for allowing me to post it for a few days.