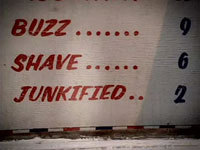 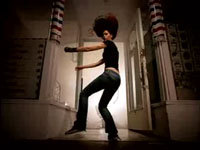 Pay attention, folks. Here's a hot new track to kick start your week with. Check out "Today," the new video from Dutch house DJ/producer JunkieXL that is the title track from his fourth album that will hit stores on April 18. Directed by first-time video director Glenn Cole (who is also co-founder and creative director of advertising agency 72andSunny), the video for "Today" features JunkieXL (aka Tom Holkenborg) as a barber who creates outrageous "junkiefied" haircuts for anyone who visits his barbershop. Cole and Junkie XL first collaborated on a Nike World Cup commercial in 2002, which resulted in the JXL remix of Elvis' "A Little Less Conversation."

After releasing three very successful albums, Holkenborg moved from Amsterdam to Venice Beach, CA to concentrate on film, video game and commercial projects. He has produced remixes for Depeche Mode, Britney Spears, Coldplay and many others.

On "Today" Holkenborg avoided to work according to one single concept. In a press statement he said he just wanted to make ten great tracks. "I thought I should do something I'd never done before, which is start and then finish an album within two or three months," he says. "That's why this album is the perfect snapshot of where I am at the moment musically. That's why it's called 'Today.' Where I am tomorrow, I don't know." To make it a consistent body of work he only used singer Nathan Mader for the disc's vocals.