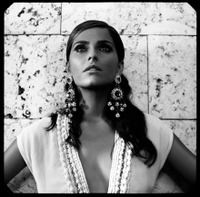 Last night I listened to an advance copy of Nelly Furtado's brand-new album "Loose" that will hit stores worldwide on June 20. The record was initially slated for release in May but due to Nelly's tour dates in Europe, Geffen decided to delay the release until after her concert commitments.

Fan message boards have been buzzing for months about Nelly's new musical direction after the singer started working in a Miami studio with hip hop prodigy Timbaland on her third record. After hearing the album in its entirety, I can conclude that "Loose" presents a whole new side of Nelly. But fans can rest assure. The album maintains the singer's qualities, individuality and idiosyncrasies that made her a star in the first place.

At first listen, "Loose" is an explosion of pure, raw energy. Continuing her "Força," Nelly and Timbaland gather big beats and cheeky raps with lots of dance floor-ready production tricks. This album is primarily a hip hop and urban pop album in the same vein as recent material by Gwen Stefani and Missy Elliott. With this effort, Furtado adopts hip hop in her own unique way to push the genre further into the mainstream, especially overseas.

Good examples of Nelly's new vibe are the first singles "Promiscuous" (for the USA - a saucy, ghetto fabulous duet with Timbaland) and the irresistible club track "Maneater" (for the rest of the world). The album version of "Maneater" is longer than what has been leaked to radio stations so far. It features a very cool, extended techno outro (similar to what Pet Shop Boys did on "Go West"). Another hip hop track on the record is "Glow."

Just as on "Whoa, Nelly!" and "Folklore," the GRAMMY winner experiments with different ethnic influences on "Loose." And this is what the singer does best. Furtado includes Middle Eastern instrumentation on "Wait For You" and she even has recorded the sweeping "No Hay Igual," a full-on Spanglish reggaeton song. Daddy Yankee be warned, because this is a hot one.

The entire album sounds like a rough cut with studio chatting and Nelly's giggling between tracks and even into the songs that creates a very informal (read: loose) atmosphere on the album.

"Loose" features two high-profile duets. After the success of "Fotographia," Furtado once again teamed with Latin superstar Juanes to record a mid-tempo ballad. Much has been written about her duet with Coldplay's Chris Martin on "All Good Things" that features Martin's falsetto vocals blended in with Furtado's crooning (as opposed to a question & answer duet). Martin is only credited as a co-writer of the song. Due to a publishing rights issue, this song is not formally labeled as a duet. Nelly told me today that she considers Chris a "ghost" on the song.

A standout track is "Say It Right," an atmospheric mid-tempo ballad with a gorgeous melodic pop chorus that will stick you whether you want it or not. The rhythmic R&B ballad  "Showtime" displays Nelly's vocals range with her deep, velvety crooning.

After getting a sneak peek of the record, I have to conclude that this is a really, really good record.
"Loose" will surely be one of the most noteworthy pop releases of 2006 that will please her fans and pleasantly surprise the masses.

(I have to put up a little disclaimer about this sneak peek review: I listened to the advance record as it is pressed now. Things might be added, remastered, remixed, modified for the final release that will be in stores. I posted this review now to get everybody excited about this new album.)