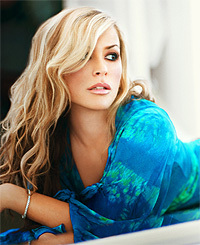 Anastacia is one of the biggest popstars in Europe and Asia who has sold over 21 million albums since her debut in 2002. In her homeland, however, the Chicago pop singer has decided to stay low-key to maintain her privacy. She makes an exception for her gay fans when she will make a special appearance during this year's White Party in Palm Springs, CA that will be held April 14-17.

The singer connects on different levels with gays. Most importantly, because her songwriting emphasizes the importance of individuality no matter who you are or what situation you are in. After battling Crohn's disease and breast cancer, Anastacia persevered and is still going strong. Her last record "Pieces Of A Dream" is a greatest hit compilation that features hit such as "I'm Outta Love," "One Day In Your Life" and "Paid My Dues." Anastacia made time in her hectic schedule to answer some questions in an exclusive interview with ArjanWrites.

You will be headlining the White Party in Palm Springs this year. What does it feel like to be acknowledged as a gay diva?
I'm completely honored to be given this title and as one of my dearest friends said "you are our new fearless leader."

As a gay diva you have the power to rule the gay planet for as long as you live. What are three new rules you'd like to enforce?
Legalize marriage for all, cure for aids and a pill so no body fat or love handles can exist.

Do you have any clue as to why gay men are so infatuated by you and your music?
Most women who are admired in the gay community have a very powerful and strong voice and I feel in some way it connects us.

You are a superstar overseas, but in the U.S. you hardly get any attention. What's up with that?
At the beginning of my career it was due to unending changes within my record label and after awhile the anonymity I have at home is not something I'm willing to sacrifice.

You got your start when you performed in an MTV talent show. How do you feel about young new artists performing in shows like "American Idol"? Do you have any advice for them?
I very rarely give advice because everyone beats to a different drum. Sometimes advice can push people in the wrong direction. I do think that talent shows on television have been a wonderful way to give opportunity to struggling artists.

At the White Party, you will be surrounded by handsome and semi-naked male beauty. You have a very strict exercise regiment yourself. What is your secret to staying lean and mean?
A bag of Doritos and a diet coke. I'm luck to have good genetics on my side. In my future, if I become large Marge you better not desert me! Big girls need love too!

Many of your songs emphasize perseverance and staying true to yourself no matter what. To what point can you relate with the struggle many young gays go trough searching for acceptance?
Life gives everyone a struggle. I try to see the positive within my own struggles.

Who is your favorite gay ever?
Sir Elton John! He represents strength, intelligence, power, grace, true friendship and a fierce wardrobe as well as a hot husband!

What songs are rocking your iPod right now?
Kelly Clarkson, Coldplay, Enya and the Gypsy Kings.