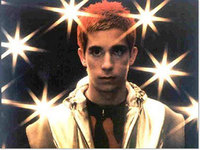 Hanka points to the website of Dutch radio and television station VPRO that features audio streams of its BPM dance radio show. A recent broadcast included great mixes by Jacques Lu Cont aka Stuart Price who reworked Depeche Mode's "A Pain That I'm Used To" and Coldplay's "Talk." Also featured in the streaming broadcast are mixes of Madonna's "Sorry" (the excellent Man Without Guitar/Stuart Price mix that is in my opinion much better than the hyped PSB mix of the song), Soulwax' "E Talking" (Tiga's Disco Drama Mix) and Alex Smoke's remix of Mylo/Freedom Five's "Muscle Cars."  [source]