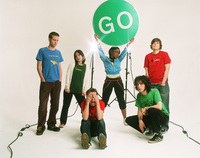 Congrats to Ian Parton and the rest of The Go! Team for entering the British singles top 40 chart yesterday at number 26 with their new single "Ladyflash." After the band's debut album was released in 2004, the group has steadily been able to reach beyond their loyal underground following with their organized chaos of '80s samples, bleeps, distorted beats and Double Dutch chanting. Bandleader Ian Parton reveals in an interview with Arjan Writes that what seems to sound spontaneous and instant is in fact a carefully put together piece of music that took months to produce. Some of you might have missed my interview with Ian in 2004, so with the group's rising fame I figured now might be a good time to feature it again. (Click here to download The Go! Team mp3's from Karmadownload.)

Listen to The Go! Team "Ladyflash"