« Free Download: Panic! At The Disco "I Write Sins Not Tragedies" | Main | Stream Willie Nelson "Cowboys Are Secretly, Frequently (Fond Of Each Other)" » 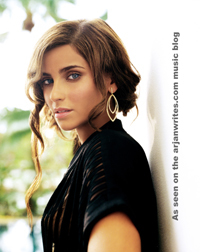 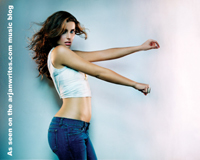 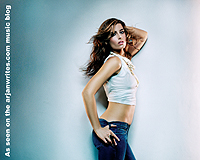 I'm working on an exciting new project that involves Nelly Furtado and her upcoming new album "Loose." I can't reveal any details at this time, but you'll be the first to know as soon as I can write more. Check out these amazing new press photos of Nelly that are taken to promote the release of the record. These photos are hot, hot, hot off the presses. In fact, the publication of these photos is pretty much a world exclusive so I decided to give this blog a little credit and put a watermark on them. I posted full-size photography on Flickr.

Nelly Furtado is staging a huge comeback on May 23 when she is scheduled to release "Loose." The album is currently mixed and mastered in the studio. All ten tracks on the record are produced by hip hop prodigy Timbaland who adds a throbbing bass line and a heavy dose of street cred to Nelly's sound. The first single off the album is titled "Promiscuous" and will be put out in combination with the club track "No Hay Igual." Rumors first indicated that the song "Maneater" would be selected as a single.  I was blown away by the track when I first heard it on European radio.  It is fresh and melodic, and presents a whole new side of the spunky Canadian singer.

Compared to her peers, Nelly has dared to reinvent herself with a completely new sound that is still distinctively hers. Whereas Pink comes with the same spiel and Paris' debut CD will likely be overshadowed by her public persona, Nelly is destined to be this year's big surprise in my opinion.