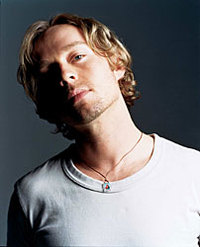 In this second part of my interview with Darren Hayes, the singer talks about homosexuality in Hollywood, his unhappy childhood and the end of Savage Garden. (Read Part One here.)

Do you think your gay fans relate to the feelings of isolation and insecurity that you often express in your music?
That's a good question. I think I'm an outsider and never really related to the mainstream. I think a lot of my fans have experienced pain in some way. A lot of my gay fans write me about the painful struggles they go through. I really try in my songwriting to be ambiguous so a lot of people can relate to it. I know what it is like to be an outsider.

But I think gay culture is changing anyway. I think I can call it the Hollywood-ization of gay culture. I'm friends with Ellen DeGeneres, and around the time she broke up with Anne Heche she was devastated. She was considered an outcast. It was horrific what she went through and what the media did to her. It was almost a legitimate form of discrimination what they did to her. It was like she was punished because she was gay.  And if you look at Hollywood today, she is back on TV and probably more successful than she has ever been.

And I wonder about that. A lot has changed in a short time to have made things easier for gay people. I've lived in cities that are very diverse and sexuality is not an issue. But in a global sense, gays still feel like an outsider.

(More from the interview after the jump.)

I think in the end that's why gay people really respect people who are a rebel and an outcast. That's how I felt all my life. I grew up in a middle-class neigborhood, living in a trailer and our family had all sorts of social problems. I had an alcoholic father who was very violent. I was beaten up, and the first few years of high school were horrific for me because I was picked on just because I was artistic and sensitive. And you know what? There's something really fantastic about succeeding as a freak! I hope that inspires people.

I just don't understand discrimination. And I cannot understand the controversy surrounding gay marriage. I was invited to Elton John's wedding. It was so emotional and so touching, and they spoke a lot about human rights. His wedding legitimized so many gay relationships all around the world that are probably more monogamous than a lot of heterosexual marriages. What is there to be ashamed of? People tend to be afraid of things that are different. Take for example religion and Scientology. People are afraid of that because it is different. I think it is changing and hope it will change. Love is love.

Was one of the reasons to move on from Savage Garden to be more expressive as a solo artist?
No. I didn't want Savage Garden to end at the time. Daniel wanted out and I was devastated by it. He actually left the band in spirit a week before "Affirmation" was released. I was very selfish at the time thinking about what his decision meant for me, but now I really respect him for having the courage to walk away from something so successful.

For a long time I resented him. It felt like I was left to pick up all the pieces. I spent a year doing all the promos on my own, and when we finally broke up I was blamed for it. But I really love him, and I have more compassion for him than I've ever had. He just worked out a lot of things about the music industry that I worked out only recently. But we don't speak anymore.