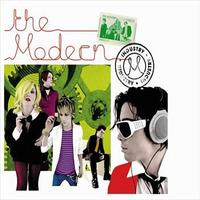 After Clear Static and Protocol comes another glammed up electro-pop band presenting '80s throwback material. The Modern celebrates both style and substance on the re-release of their single "Industry" (out on March 6). The British quintet first hit the music scene late 2005 with their debut single "Jane Falls Down" on Vertigo Records. The group is currently wrapping the recording of their debut album together with producer Stephen Hague (Pet Shop Boys, OMD, Erasure).

Founded by Nic Linn and Chi Tudor-Hart, the ambitious group takes its inspiration from some of the great synth-pop artists from the past. "People are finally seeing how influential bands like The Cure, XTC and Joy Division were, bands that were guitar driven but were also pop," says main vocalist Linn on the group's website. "We want to combine the electroclash, synth pop, edgy guitar image and production values with pop songs that people latch onto. In the Eighties, pop was interesting. The Cure appealed to angsty teenagers but they could also be on the cover of Smash Hits. There just isn't that kind of crossover band any more."

Muscially, the group's boy/girl vocals, crisp melodies and new wave-ish synth pop mostly invoke memories of Human League. The critics have been rough on the group for their lack of originality, but as a child of the '80s I welcome groups that celebrate our pop heritage and bring it back into vogue with modern production techniques, fierce fashion and dancefloor-ready hooks. (Thanks to Rich for his suggestion.) (Click here to download The Modern songs from 7Digital.)

Listen to The Modern "Industry"

Watch The Modern "Jane Falls Down"