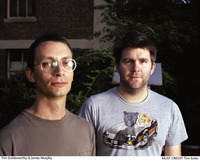 The DFA ( Tim Goldsworthy & James Murphy) will be releasing the first installment of their new remix series "The DFA Remixes – Chapter One" on DFA/Astralwerks on April 4th. This compilation is a celebration of some of their hottest remixes including tracks by Fischerspooner ("Emerge"), Gorillaz ("Dare"), Deceptacon ("Le Tigre") and Soulwax ("Another Excuse").

Over the past years, the DFA has built a reputation as one of the most innovative and hip dance producers in the music industry with their post-punk electro beats. No wonder that people like Janet Jackson and Britney Spears have requested their services to add indie dance cred to their sound. In fact, one of my favorite Britney songs is a 2001 demo track that she recorded with the duo but was deemed too experimental for the singer by label executives.

The second "DFA Remixes" album is already in the works and will feature tracks by Goldfrapp, N.E.R.D. and Nine Inch Nails. I'm curious if they selected to spotlight Golfrapp's "Slide In" remix, which is one of my favorite DFA remixes. (Update: the Goldfrapp mix was earlier featured at the duo's MySpace page but was promptly removed.)