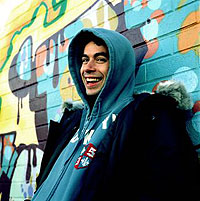 While the blogosphere is buzzing about the performance of Kevin Federline on his debut single "PopoZão," I'm glad that the song is finally bringing favela funk to the masses. Made in the ghettos of Rio de Janeiro, favela funk (or baile funk) is a raw musical style characterized by its fierce, sweeping rhythms and melodic improv. Federline's "PopoZão," was produced by Disco D. who is one of the few American DJs to adopt the unique Rio street sounds in his productions. Previously, I've written about DJ Diplo who has used favela beats in his work for M.I.A. and on his dance compilations. The emerging popularity of favela funk indicates that it might become a major pop trend in 2006.

Disco D. first achieved notoriety as one of the originators and top DJs of Ghettotech, an urban hybrid of Detroit techno and electro, Chicago booty house and Miami Bass. After being hailed a DJ prodigy by URB Magazine a few years ago, he moved from to Detroit to NYC to fully focus on his music career. He got some high-profile production gigs, including stints with Pharell Williams, Christina Millian, Nina Sky and 50 Cent. He gained interested in the sounds from Brazil when he started dating his Brazilian girlfriend. On Federline's MySpace page, he explains a little about the song and his interest in favela funk. "In Portuguese, 'PopoZão' means luscious ass," he writes, "My fiancee is Brazilian and I live in Sao Paulo half the time, thus the influence on the sound."

In related favela music news, Diplo spent time in Rio recently to film a musical documentary. He also worked on some new remixes, including a remix of 3rd Bass' "Shut Your Mouth" that is available for download on his web site. It is another fine example of how Diplo is able to mash up a vintage rap track from the late '80s with the contemporary sounds of Rio to create something new and exciting. [source, source]