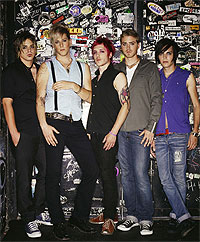 The latest band to take its inspiration from early '80s new wave are newcomers Clear Static. Riding on the coattails of the success of The Killers and The Bravery, this Hollywood, CA band might have a shot at fame with their punk-infused '80s pop. Their gimmicky first single "Make Up Sex" is the introduction to their full-length album that is scheduled to be released early March.

Maverick Records' p.r. flacks know that perception is everything. In their press materials they dramatize the band's '80s influences with descriptions that seem a little over the top with descriptions like "[Clear Static] evokes images of mascara, frilly shirts, flamboyance, and hedonism. Yet today their gigs draw throngs of eye-lined, glammed-out kids into places like the Viper Room and Key Club and onto the teeming sidewalks outside when not even one more fashion casualty can squeeze into the venue."

Such overload of adjectives creates the impression that Clear Static is just another pop fabrication. But that's far from the truth. They might have glammed up their act a little, but band has been working hard for the past few years to get a record deal. Early last year, they were signed to indie Brit label Lizard King Records (where The Killers got their start). Then the band toured with their heroes Duran Duran and showcased their music at the SXSW music festival. Then, the quintet was scooped up by Maverick's Guy Oseary who earlier brought Alanis Morissette and Michele Branch to the label.

Check out Clear Static's single "Make Up Sex," a catchy slice of fashionable '80s pop. The handsome band takes its cues from great tunes from the '80s music vault, but on "Make Up Sex" the group compensates its lack of originality with pure, infectious energy. (Click here to purchase the single at Amazon.)