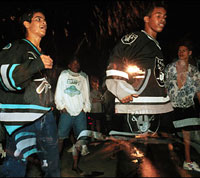 Some prominent Brazilian bloggers are responding to the rise of favela funk in mainstream pop music, and Disco D's latest favela-inspired production "PopoZão" for Kevin Federline.

MadeInBrazil finds Federline's interpretation of the genre "incredibly embarassing" and explains that the music is an important part of Rio's nightlife culture. "Favela funk happens to be a true and unique musical voice of the favelas in Rio," he writes. "In my humble opinion, it is to Rio what hip hop is to New York. Funk has been prominent in Rio for years now, and it is already a part of local culture. As a matter of fact it is such a part of Rio that rich kids venture in the favelas to go dance at baile funk."

Writing from Rio de Janeiro, Phelipe explain more about the origins of the music. "We call it 'funk carioca' because the beat was created by the favelas of Rio de Janeiro," he writes. "Carioca is someone who was born in Rio. People from the favela have been dancing to this beat in the 'bailes funk' since the '80s."

He adds that the best clubs in town have been playing the favela funk for years now as well, and that foreign tourists are "in love with the beat." He has no appreciaton for Kevin Federline's "PopoZão," "He can't even say the word right," Phelipe writes. "For Brazilians, the song is a joke. Just like the guy who's trying to sing it." [photo source]