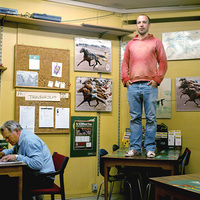 Download Tom Neville's Clean Edit mix of Mylo's "Destroy Rock & Roll" that was especially created for the U.S. market. The song is the title track from Mylo's debut album that will finally hit stores stateside on February 7. Neville has included some extra beats and a high-pitched string section to add some dancefloor drama.

The track samples a preacher's moral rant against a list of '80s pop stars. Mylo told that he was not sure if Americans would get the humor of this. He added that many of the artists that the evangelists mentions have been an inspiration to him. "When I did my PhD [in Philosophy] at UCLA I really got into the classic rock stuff from the '80s. Some of those tracks I sampled for the album," he tells Arjan. "I didn't have much work to do at UCLA, but there was a great radio station in LA County. I used to drive around just listening to the radio." Pick up a copy of the January/February issue of GENRE to read my entire interview with Mylo.

On a related note, Mylo is very thankful for the best wishes he has received via Arjan Writes after I published the news about his hearing loss. His business associate wrote me that Mylo is currently well and taking some time off to get better. Please sign my online Get Well card for Mylo. 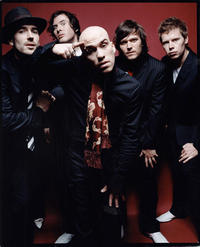 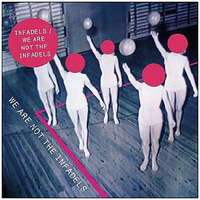 After tuning their sound in the backroom of Ibiza's dance mecca Manumission for two years, British synth-rock outfit The Infadels finally release their debut "We Are Not The Infadels" in the U.K. today. The Infadels are the latest band to combine '80s punk-pop elements with today's electronic production stylings. But the group presents a distinctively different sound compared to many other punktronica bands that are flooding the music scene. Instead of relying on slick pop choruses, model girlfriends or thick eyeliner, these East Londonders present an authentic underground sound that is confident, raw and truly invigorating.

The album kicks off with a rush of energy on "Love Like Semtex" that flows into the bouncy lead single "Can't Get Enough." "Girl That Speaks No Word" should be chart contender as well with its straight up lyrics and downbeat production. The poignant "Reality TV" is one of my favorite tracks on the record. "Wanna see people hugging and kissing. That's because it's what you're missing. The people on the screen are your best friends now," sings Bnann about people's obsession with reality television.

The group turns down the volume on "Murder That Sound" that has a nice cosmopolitan feel with lyrcis like "Some people say they're free in the city with their liberty. But I don't go for that." The distorted electro-clash on "Give Yourself To Me" turns into a ska-like beat that exhibits the group's ability to experiment with different genres and make them their own. I also highly recommend the catchy disco-rock stompers "Jagger '67" and especially "Sunday" with its infectious synth loop.

Not included on the record is the song "Brandon Vegas" that will mostly like be a B-side tune. As you might initially expect, the title is not a nod to Las Vegas-based Brandon Flowers of The Killers. The song takes its inspiration from a news story about Brandon Vedas, who, persuaded by friends in an Internet chatroom, died of a drug overdose.

If there ever was a wall between dance and rock, The Infadels tear down a big piece of it on this debut. "We Are Not The Infadels" is a sublime album brimming with attitude and refreshing, retro-fitted dancefloor rock that deserves to strike it big on 06. (Click here to download the entire album in mp3 format at 7Digital.)

Stream The Infadels on MySpace 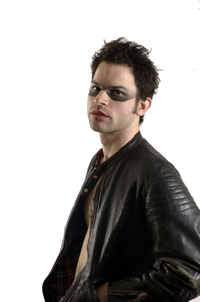 West Coast mashup maven DJ Earworm serves up a brand-new production on his web site. This time he mixes up twenty-two tracks to one new buzzing remix that he has titled "What's My Name." His picks include Ace of Base, Eminem, Beyonce, Maroon 5, DMX, The Who and Eurythmics. Can you guess the others? [source]

Listen to Earworm "What's My Name" 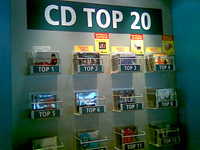 These are the beststelling music CDs at Amsterdam Schiphol airport this week:

It is surprising to see the Infadels this high up in the sales chart. I'm puzzled because the CD is not out in the U.K. yet so I assume the Dutch got a pre-release. In any event, I purchased a copy and I'm listenting to it now. I'm liking it a lot. Produced by Jagz Kooner, it is another British band who are combining indie rock with '80s new wave and synth elements. However, the Infadel's sound is rougher around the edges with less obvious pop hooks that will surely guarantee more longevity. Full review to come. (Photo via mobile phone)

The title of this post is taken from Pet Shop Boys' "Home & Dry" that I was listening to on my way to Europe a few hours ago.  I'm currently at Amsterdam Schiphol airport in a fancy internet lounge waiting for my next flight to the south of France. Flying to Europe can be quite tedious but as soon as you hit daylight the sky turns into this gorgeous blue and pink mesh that is absolutely gorgeous. I've been enjoying my iPod Shuffle and my new Shure E2c Sound Isolating Earphones that have replaced my old, bulky Bose headphones. The sound quality of the Shure earphones is amazing. I absolutely recommend them if you're looking for a new pair. Here's a small selection of my transatlantic playlist:

UPDATE: I have arrived at my destination (for those who care).