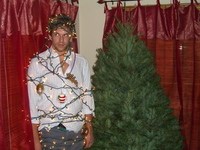 My Playlist is a new item on Arjan Writes that spotlights a well-known personality who shares some of his or her favorite tracks of the moment. The first person to be featured is writer/blogger/actor/television star Dan Renzi. Dan is mostly know from his work for MTV that he combines with a successful career as a writer and actor. If you have a moment, head on over to his fantastically funny blog. Thanks for sharing your top songs, Dan!

Johnny Cash, "Folsom Prison Blues"
Movie, schmovie.  I have always loved Johnny Cash, especially this song.  What a fuckin' stud. Runner-Up: "Ring Of Fire" makes me dance around the room and sing along.

Dolly Parton, "Twelfth of Never," with Keith Urban
Am I the only person who recognizes the extreme anti-war message of her album "Those Were The Days"?  Who knew Dolly was so political? Whatever, the album is great regardless of the theme. P.S.:  I will marry Keith Urban someday.

Supreme Beings Of Leisure, "Strangelove Addicton"
This is an old song, but I've been having relationship problems lately and the lyrics sing true.  "I feel/That I'm not good enough for you/I just don't measure up..."

Ben Folds, "Gracie"
This song is about his daughter, which is the cutest thing ever. I saw him perform at a taping of PBS's "Austin City Limits" and I was hooked. His lyrics are cathartic and geeky and fun.

James Blunt, "So Long Jimmy"
"You're Beautiful" is on the radio, but it's a little too weird for me. "So Long Jimmy" should be released soon, it's beautiful.

Michael Buble', "For Once In My Life"
I picked this song at random. I love everything he sings. I even love his Starbucks commercials. I love it all.