« Where Are They Now: Erasure | Main | Video Premiere: Westlife ft. Diana Ross "When You Tell Me That You Love Me" » 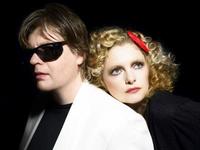 Meeting pop stars is a bit crazy. There's always a posh hotel, a few high-energy handlers, fresh organic green tea and lots, lots of waiting. For some reason schedules are never kept and things always run over. My meeting with Goldfrapp on Monday was not any different.

While the band is hardly known in the U.S., the duo has made a significant impact on the European music scene this year. Point in case is Alison Goldfrapp's appearance on the European Video Music Awards to hand out the award for Song of the Year to Coldplay.

The interview with Alison Goldfrapp and Wil Gregory was very pleasant. We had an hour-long chat in a trendy hotel suite at the Hotel on Rivington looking out over the lower part of Manhattan. Both were in good spirits and ready to take on the American press to discuss the forthcoming U.S. release of "Supernature."

Alison was a bit standoffish at first, but soon turned talkative and feisty while Will inserted some of his thoughtful comments at times. It is interesting how often they finish each other's sentences and joke around.

Most of the interview I'll have to keep under the wraps until it appears in a national publication in 2006. But some of you were kind enough to submit questions for the interview and I was able to ask some of them. I edited some of the questions into a more appropriate format. Thanks!

(Question from Peter J) In several publications it was stated that you think Madonna's music is unoriginal. Were your comments taken out of context?
Alision: No. Do I have to go over this again? She has made a career out of using other people, like the latest DJ or whatever person, to kind of build her music for her. It is a clever way of making her music. It is very different than what we do. We're actually writing and producing all of our music ourselves. But what she's doing is not really that different than what singers did in the '60s. Or it is like Massive Attack. Where Massive Attack is the label and then other singers come in to do the vocal parts. I'm not a particularly big fan of Madonna's music. I can't get passionate about the music she puts out there. I think her persona is far more fascinating for me and for a lot of people. She's been amazing inspiration to women and I think it is fantastic that she's 47 and still does what she's doing. I think that's quite inspirational.

(Question from DJVJ) Does the song "Ride A White Horse" refer to Bianca Jagger's entrance to Studio 54?
[Laughs] That part has been over, over, over overthought about by so many people. Yes, it does refer to that. But it refers to a lot of other things as well. The Bianca Jagger moment did not particularly inspire me, but we thought it was just a memorable moment of the disco era.

(Question from DJVJ)  Is there a T. Rex obsession?
Not really. And "Riding A White Horse" was not inspired by T.Rex. "Ooh La La" was probably inspired by  T.Rex but that's it.

(Question from Matt) How long are you staying in New York and will you be doing any other types of promotion?
We're in New York until Saturday doing interview most of the week. Later in the week, we'll be in Canada as well to do more interviews.