arjanwrites.com: Free Download: Nightmare Of You "My Name Is Trouble"

Free Download: Nightmare Of You "My Name Is Trouble" 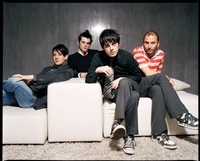 "My Name Is Trouble" is one of my favorite songs from Nightmare Of You's self-titled debut record. With its bouncy synth loop and cheeky lyrics, the song has been compared to the sound of The Killers and the heartfelt storytelling of Morrissey. The quartet's album is filled with great little gems like "My Name Is Trouble" and I consider it one of the most noteworthy debuts of the year.

Singer Brandon Reilly writes me in an email that the meaning of the song comes from a very personal experience. "[The song is about] my inability to make a relationship work and my amazing, flawless ability to hurt each person that enters my life," he confides. In the song, he poignantly sings, "Don't be so unkind/I know I stole your coat/You can have this song I wrote/I've just crossed the line/From fashion to crime/But it's such a perfect fit/When I am wearing it."

Reilly dismisses the comparisons that people have made between his band and The Killers, The Cure and Morrissey. "Synths, dancing, eyeliner, borderline faggotry. Beatles? Smiths? Nirvana? Bob Dylan? Its all been done," he tells Arjan. "All I claim to do is write great songs. I'm not trying to reinvent any wheels or set up my pro tools and record myself beating a washing machine with a dead fish. Its pop songs. The message is all that matters anyhow. Not how many kitchen appliances can be miked up with SM 58's [microphones] to sound like galactic fireballs."

About Morrissey he says, "We are two completely different people with different views. For example, I have a sex drive."

If you would like to have your music featured on Arjan Writes, email your mp3 to arjanwrites@gmail.com for consideration.