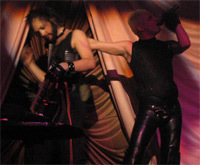 Nag Nag Nag continues to be one of the hottest (gay) club nights in London. Every Wednesday, a mix of "freaks, pansexuals and errant pop stars" pack Ghetto on Falconberg Court to dance to a fierce mix of pop, gothy electro and punk. Since its opening in 2002, the party has become a cultural phenomenon that is frequented by artists like Boy George, Mylo and Pet Shop Boys.

The night is ran by DJ Jonny Slut (aka Jonny Melton) who has been very particular about the music played at Nag Nag Nag. "The music was the key thing. As well as electro, I've always been a fan of late punk, early new wave, art-school punk like Cabaret Voltaire, Delta Five, Gang of Four and Wire, that kind of stuff," he tells IdeasFactory in an interview. "That's been the music I've always returned to so I also wanted to start a club where I could play that sort of music alongside the new electro. I could see a lineage between the two styles: the new electro music is more thoughtful and arty."

Together with DJ pal Fil OK, Melton also started the electro-synth duo Atomizer that was signed to the famous International Gigolo Records. Produced by Jimmy "KLF" Cauty, "Hooked On Radiation" was their first release that hit stores in 2003  The band is hosting a bunch of old remixes on their web site, including one by the Pet Shop Boys who are big fans of Atomizer's live shows. What I like about this mix is how the fierce punky styling of the original is infused with Pet Shop Boys' signature melodic pop sensibilities that creates a deliciously bizarre brew. (Purchase the entire CD on Amazon.)

Currently, Atomizer is touring around the world. They recently did remixes for Boy George, Kings Have Long Arms and Sioban Fahey. Their forthcoming next single is titled "Zero Zero/Nostalgia (There Is No Money In The Underground" and will be put out on NagNagNag Records. [source, source]