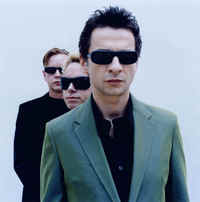 Go stream the entire new Depeche Mode album "Playing The Album" on their MySpace site. The album will be available in stores next week.

"Playing The Angel" is the follow-up to 2001's critically-acclaimed "Exciter." The trio has developed a reputation for their dark songwriting, but this new disc serves up a lighter fare with faster-paced tunes that are more hooky than their melancholic past. For the first time singer David Gahan contributes songs to the record (guess which two). But most of the tracks are done by musical mastermind Martin Gore. His lyrics still examine the most obscure parts of human relationships, but after 25 years of channeling pain and suffering, Gore has found a milder tone to express some of the misery.

Now going through a divorce, Gore has been inspired by his children to include flurries of optimism in his songs, such as demonstrated on the clubby single "Precious." But regardless of its brighter tones this is a quintessential Depeche Mode record that shows the band still has their finger on the (cyber) pulse with plenty of deep basslines and hi-tech sound effects.