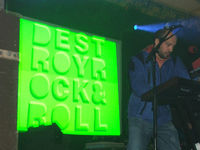 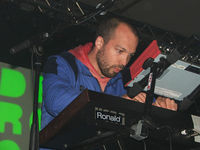 Mylo's "Destroy Rock & Roll" is a deliciously hooky lo-fi album that primarily relies on clever sampling and Mylo's electronic production wizardry. But for his live performances, Mylo has chosen to play songs with a live band, including a guitarist, keyboard player and drummer (Mylo's brother Hector). You can now purchase and download some of his recent live sets on Live Here Now. I downloaded an mp3 of Mylo's live show at Glasgow Barrowlands from last Thursday and I was impressed with the slick live rendition of the album tracks. The public service announcement that interrupted the gig made it all even more real. Go to Flickr to get an idea of what Mylo's live set looks like. (Mylo photos courtesy of JullieB.) 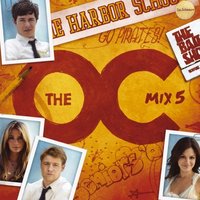 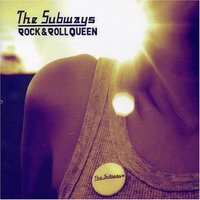 The fifth installment of the popular The O.C. soundtrack series will be released next week. It is interesting how such a commercial show has become the plaform for many indie bands to gain notoriety with the show's muscial compilations. The O.C. Vol. 5 features tracks by Kaiser Chiefs, Rogue Wave, Imogen Heap and Britain's newest indie sensation The Subways. Download The Subways' track "Rock & Roll Queen" a raw and energetic rock gem that is the opening song on the album.

The Subways are Billy Lunn (guitars,vocals), Mary-Charlotte Cooper (bass, vocals) and Josh Morgan (drums). After playing the local Essex bar circuit, the band signed to City Pavement & Infectious Records in late 2004. Produced by Lightning Seeds frontman Ian Broudie, the trio's album "Young For Eternity" was released on the 4th of July 2005. Their first single "Oh Yeah" was an immediate success, reaching the top 25 of the British singles chart. 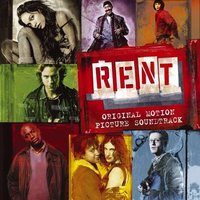 The movie version of Broadway's Tony Award-winning rock musical "Rent" is one of the most anticipated movies of the year. In short, "Rent" tells the story about a group of young East Villagers in New York City who cope with such harsh urban realities as AIDS and homelessness. Featuring Rosario Dawson and Taye Diggs, the music of the movie is available on a double disc set. The record includes one of the musical's stand-out songs "Seasons Of Love," a touching song about friendship, love and living in the moment.

Emerging remix duo L.E.X. (Eddie X and Luigie Gonzalez) was recruited by Warner Brothers to create a club version of "Seasons Of Love." Recently, the two hit the Billboard spotlight when they scored a number one dance hit with a remix of the Vivian Green track "I Like It, But I Don't Need  It." L.E.X. have been working together since 1999 when they met at Grooveman Records in South Beach, FL. Luigie handed Eddie a demo of his own production of dance tracks. Eddie was impressed and asked Luigie to create a track with him for club Pump in Miami. With Luigie's progressive trance style and Eddie's tribal beats, L.E.X. creates a distinct Miami style of their own that is clearly reflected in their "Seasons Of Love" mix.

(A big thanks to L.E.X., Pinnacle and Warner Bros for making this mix available to Arjan Writes.) 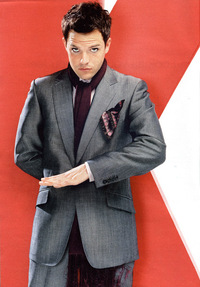 Yeah. That's right. That's Killers' lead singer Brandon Flowers in front of a big red K, the trademark logo for K-Mart. So does this mean a fashion pact between the dandy singer and the discount chain? Maybe.

Flowers (who has been described as foppish and fey) is a huge fan of fashion. In fact, it was his favorite designer Dior who delivered that famous pink jacket. But in an interview with The Times, he explains that his signature blazer  has lost some of his original shine. "I had this nice pink Dior jacket, but I was sweating so much that it ended up a weird purple color," he told the British paper.

Flowers also admitted that not only fashion designers, but also some of his peers have inspired his look. In the The Times he reveals that he wore Hush Puppies to his first meeting with guitarist Dave Keuning just "because Oasis wore them."

So what we can expect from an affordable Brandon Flowers fashion line at KMart? Hush puppies, pink leather blazers and black pants? Not sure if that would pass the Queerty fashion test or MiB's sense of style, but it would sure rock mainstream U.S. fashion a little.

But to be clear, the photo of Brandon in front of the big K has no association with K-Mart at all (to my knowledge). It is just a coincidence. The photo was taken for the fashion feature in The Times on October 7. But it is sort of fun to think about it, don't you think? And the photo made me wonder.

Goldfrapp to Perform in NYC in December

Goldfrapp will be performing in New York early December to stir up some early buzz for their new disc "Supernature." Alison Goldfrapp and Will Gregory are scheduled to play the Nokia Theatre on December 5. Tickets go on sales on October 29 via Ticketmaster. In the meantime, check out the duo's dazzling live performance of "Number 1" at Jools Holland last Friday.

"Supernature" will be released March 7, 2006 via Mute. Until then, US fans will have the "Number 1" EP" to look forward to. The EP/DVD package includes the title song but also the rare tracks "Beautiful, "All Night Operator" and remixes by Tiefschwartz and Alan Braxe & Fred Falk. The record will be available on November 1.

The EP also contains "Number 1: Postcards From The Summer," a video compilation of the band's U.K. tour this summer. I captured some of the DVD's images and posted them at Flickr.