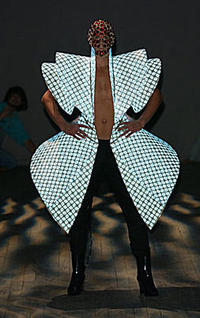 (Exclusive) After a summerlong stint at Manumission in Ibiza, Fischerspooner has returned to New York. Casey Spooner tells Arjan that he is glad to be back home, and also reveals that Fischerspooner has signed on to record a third album for Capitol Records! This news should shutdown naysayers who didn't believe the duo would last beyond their battles in the recording studio last year.

The duo will be touring in South America and Asia, but has postponed a U.S. tour to give Casey time to retool the Ibizia show to be a different type of rock show. In other words it will be fucked up and non-traditional. That's how we like our Fischerspooner. The band's only scheduled North American performance is at Irving Plaza in New York at Halloween.

In related Fischerspooner news, Casey emailed me a photo of himself dressed in a Gareth Pugh garment that he recently wore at the Pugh show in London. His fierce outfit was made from laminated lamps. You can read more about Pugh and Spooner here.