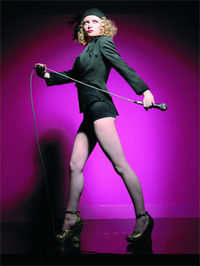 Mute/EMI is such a tease. First they delay the release of the new Goldfrapp record "Supernature" in the U.S. to March 2006 and now the label execs have decided to put out a teaser EP with only a few song from the new album in December. Good news is that the EP will include two bonus tracks for the full-length album. And they will also make us happy with a series of Goldfrapp podcasts!

Alison Goldfrapp wrote me that unfortunately there is not much the band can do about the album release schedule of "Supernature." "It's out of our hands when it gets to this phase of the record cycle," she writes Arjan.

Here are a few exclusive details regarding Goldfrapp's launch in the U.S.: