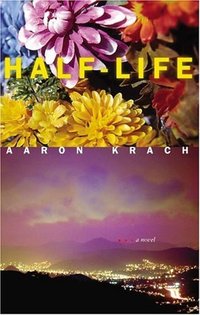 "Half Life" by Aaron Krach is one of the most entertaining novels I've read this past summer. The book tells the story about the depressed Adam Westman who grows up in the urban wasteland of Los Angeles in a broken family. After the suicide of his father, his young life unravels until a hunky cop comes to the rescue. Under the surface, the story is about the obscure relationships that people form and the illusion, dissapointment but also inspiration they often represent.

Krach has put together a mix tape of music to read by for Arjan Writes. I love his picks of Sigur Ross, the Beach Boys and Moby. After the jump, Krach gives a song by song description of his selection. Thanks Aaron!

Sigur Ros.
Well, for my money, there’s a sneaky relation between the moody Icelandic bands music and the underlying vibe of Los Angeles…the L.A. of "Half-Life"…the L.A. without the movie stars…the L.A. when "ordinary folks" live extraordinary lives.

Mum
Because you can get every more surreal and moody than Sigur Ros. What is up with Iceland that the little place can churn out such trippy music.

Air
Okay, French, not Icelandic. But damn the first album, "Moon Safari" is awesome and celestial, which is a theme that runs through "Half-Life." Stars and Hollywood stars and the Los Angeles sky that is never black enough too see the stars in the sky.

"Einstein on the Beach" by Philip Glass
The end-all-be-all of experimental operas. The thing blew people’s minds when it first came out and it continues to ripple through musical culture today. This particular excerpt is heartbreakingly romantic. Sample lyrics: "Two lovers sit on a bark bench next to each other. 'How much do
you love me?' he asked. 'As much as the stars in the sky,' she answered."

“Sexy Boy” by Air
This song is actually in the book. And it comes at a very crucial moment towards the end. Jeff, the sexy older cop picks it to play while on a date with young Adam.

k.d. lang
Because "Constant Craving" is perhaps the most universal song. And k.d. lang is vocal-genius.

Brian Eno and Patsy Cline
Two ends of the same spectrum. One electronic and the other country western, but like "Half-Life," both artists traffic in the melancholy of broken hearts.

“Surf City” by The Beach Boys
This one is also in the book. Adam, the main character is going through a phase where all he wants to do is listen to oldies. It’s also oddly ironic because Adam is so gay and couldn’t be further from the lifestyle celebrated in the song.

"Waterfalls" by T.L.C.
Another song from the book. Best friend Dart wakes up to the song one morning and thinks about the video. You know, the one where the guy has died of AIDS and his girlfriend looks at his picture longingly.

"Uptight, Alright" by Stevie Wonder
Because I could only pick one song by the master of soul. And this one is so positive, which "Half-Life" is as well. Under the layers of heartbreak, suicide and bad parenting lies a young man with a heart.

"Stars" by Moby
a) I love Moby’s music. B) when this song came out, it was about my book, I’m convinced. "We’re all made of stars…" is just too perfect. C) So I asked Moby (through his manager) if I could use a bit of text/lyrics as the dedication in the very front of the book. He agreed. And I couldn’t be more proud to have his artistry grace a front page of "Half-Life." Now I love him even more.