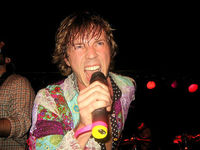 Talking about Tiga... LetNoManJack commented  that our favorite gay Jake Shears is featured on Tiga's new single "You Gonna Want Me." The song is taken from Tiga's upcoming album "Sexor" that will be out early 2006.

Tiga and the guys from Scissor Sisters are old pals. Tiga and Jake became friends when Tiga was playing Sonar and Scissor Sisters were still hoping for a record deal. Tiga then produced the band's first release and Babydaddy returned the favor when he (secretly) produced Tiga's underground hit "Hot In Herre" that also features Jake on vocals. Watch the famous marionettes video here.

The video for "You Gonna Want Me" was shot by Michael Gondry's brother Oliver. The single will be out October 10. (Thanks for heads-up LetNoManJack. Jake Shears photo via EatsDirt.)